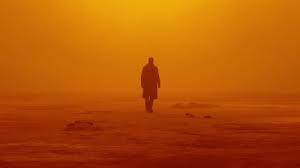 I was afraid this belated sequel would be made too accessible. The original masterpiece, directed by Ridley Scott, was met with faint praise and middling box-office returns, and so, I presumed, 35 years later, this new film team would want to simplify. Lighten. Keep the mood, the atmosphere, and premise, but then deliver a more structured story, a less elusive story. Part of me would like to say kudos to the director, Villeneuve, writer, Hampton Fancher, and anyone else involved in this film’s final confounding effect. I’d like to focus on its many virtues and hail this film as the next sci-fi great, but that would be ignoring the tremendous amount of frustration I felt during and after its run. That, in itself, could be seen as a commendation for Blade Runner 2049, if it weren’t saddled with the more severe feeling, the worst of all film watching emotions, which is boredom. Blade Runner 2049 is 163 minutes long, and it felt like 163 minutes. Its runtime and massive pretensions wore on me. Therefore I will not be extolling this epic sequel, but instead will admit to feeling disappointed.

A quick catch-up is necessary, and fair warning, spoilers from 1982’s Blade Runner forthcoming (I will do my best not spoil 2049). The futuristic setting and context are recounted to us at the outset of 2049, so I’ll only remind you of the key plot points in Blade Runner. Rick Deckard is an L.A cop whose sole purpose is to find and stomp out a rogue breed of androids (replicants) that have surpassed humans in nearly every aspect of living. Originally intended to be slaves of labor, these super-humans, led by Roy (Rutger Hauer), revolt, making them threats to society. Deckard and anyone in the pursuit of killing androids are referred to as a Blade Runner. In the course of his duty, Deckard meets Rachael and identifies her as a replicant. Instead of “retiring” her, he falls in love, and the two escape Los Angeles 2019 in hopes of starting a life together.

2049 stars Ryan Gosling as a Blade Runner known as K. We are told early on, explicitly, that he is himself an android, which is something that was left ambiguous about Deckard in the original. K, whose mission is to stop a growing resistance movement from a factious line of androids, stumbles on a secret that could change everything. A miracle of sorts. Twenty-eight years earlier, an android gave birth to a child. Androids giving birth was previously thought impossible. Everybody wants this miracle android, now an adult. The resistance wants the child as a symbol of their “humanity,” to validate them in essence. The L.A.P.D wants all evidence of a miracle android to disappear.  And a sinister third party led by a replicant manufacturer and perverse God-figure Niander Wallace (Leto) want this mysterious android to help him solve reproduction in his models in order to bolster sales. K’s discovery ultimately leads him to an old, worn-out Deckard holed up in Las Vegas, and the two spend the rest of the film fighting Wallace’s henchmen and sorting through revelations.

Blade Runner, and this is certainly true of its source, the Phillip K. Dick novel, Do Androids Dream of Electric Sheep? built its reputation on being a challenging science fiction marvel that blended pulp noir with enormous religious and philosophical themes. Is this true of its sequel? Comparison is inescapable. I don’t think it is. I found 2049 to be brooding rather than deep or thoughtful, and solemn rather than atmospheric. I found myself imagining the director holding a stopwatch, making sure that there was at least a five-second silence between every passage of dialogue. I especially found Jared Leto’s character, in theory, the most interesting, to be pretentious and awkward; his dialogue nonsensical and his weirdness forced. Should we talk about 2049’s themes? Does subtext matter when you find the text muddled? The most readily apparent theme concerns the character of Niander Wallace. Wallace has a God-Complex-he even calls his creations angels- but it’s important to note that none of his replicants can procreate. It was Tyrell, the original creator from Blade Runner who made the replicant that had the child. Think of Tyrell as a God-figure and Wallace as an imposter, someone who wants to be in Tyrell’s place. A sinister, lesser creator. A devil. Lucifer. Much of his dialogue highlights the dichotomy between him and Tyrell, as he laments that there are good angels and bad angels. Beyond that, I was at a loss to forage themes of interest. True, there are quotes intended to be provocative. “The most human thing you can do is die for something you believe in,” for example. But, in all, I found the pickings slim, in terms of subjects for thought.

The visuals, this artificial future created by film artists and technicians, which have been lauded by critics en masse, were a source of discontent for me. Shot to shot, is 2049 nice to look at? Mostly. Roger Deakins is a thirteen-time Oscar nominee. The lighting and hues are spectacular, sure, but Blade Runner was more than that. The design of Los Angeles to this day, thirty plus years later, is awe-inspiring. 2049 reminded me of too many sci-fi pics that preceded it. Clinical atmosphere to indicate a washed up future. Rich hues to be aesthetically pleasing. Blade Runner created a world that I wanted to spend time with (if not actually inhabit). 2049’s vision of the future passed the time. There is almost no trace of noir in the proceeding, and that to me is a major loss between Villeneuve’s film and the original. Just look at the original poster: 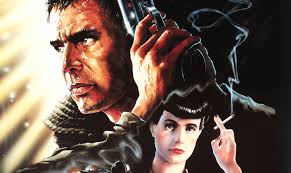 This poster captures the noir spirit of the first film, one that’s lacking from its sequel, and it’s that spirit that mesmerized me.

I had mentioned virtues in my opening,and on a more positive note, 2049 unquestionably has some. The dual leads were impressive. Gosling as the weary, embattled cop is strong, and Ford gives his one of his best performances in this, a supporting role. The sound design, unlike the visuals, is inspired, and the final sequence, a fist fight in a flooding hovercraft, is a tour de force. Worth seeing. Worth being disappointed by. Worth holding the minority opinion on and having to argue with people you respect about.