Solid week. Watched a number of good films. Saw It in theaters. Meanwhile, I’ve been watching a few television series: Sneaky Pete, Gravity Falls, and Glow. The week’s highlight? Seeing Jaws again for the first time in over ten years.

Plot Summary-Wanting to begin again in life, Howard Kemp (Stewart) tracks down a wanted fugitive and plans to collect on his bounty. The venture is complicated by two strangers-one a caddish soldier and the other a deceptively meek prospector-who want a piece of the pie. The three men transport the criminal and his girl, while always keeping an eye on each other.

My Take-The best of what are termed the Anthony Mann psychological westerns. With shades of Treasure of the Sierra Madre, the chief pleasure of the film is its clash of distinct characters. As a Hollywood western of the classic tradition, it’s a little too glossy at times. Still a superb picture. Simple story, complex western. 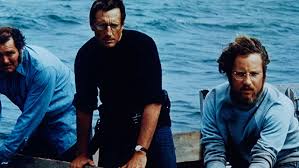 Plot Summary- An island resort town is in chaos when it’s found out that a shark is terrorizing their water in the heart of the summer season. A bereaved mother puts a bounty on the shark’s head, after it kills her son, which brings dozens of insane hunters to the beach. Sheriff Brody (afraid of water) deals with all of this.

My Take-Exemplary monster film. Holding off on revealing the monster is cliche now thanks to how perfectly that technique was demonstrated here, and then copied by later films. There are only three real characters with any depth here, but Spielberg makes them interesting enough to carry the action. Quint (played by Shaw) steals most of the scenes as the most colorful character. Later scenes drag a little. I’d say early in the third act. The first half and the movie’s conclusion though are top notch.

Plot Summary-Zaniness, gags, and meta humor abound as Hope and Crosby (both long in the tooth) get roped into a world domination plot that brings them to Hong Kong.

My Take-The last in the Road to… series maintains all of the humor and fun of the previous movies. Bob Hope has at least a dozen clever one-liners, the songs are catchy, and I really enjoy the exotic locales. Naturally there’s plenty here in terms of cultural representations that is outdated. (Whites playing Asians or Indians mainly.) Peter Sellers is hilarious though as a shady Indian doctor. 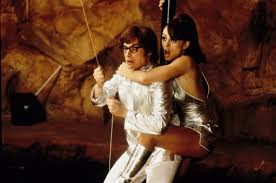 Plot Summary- Austin Powers, a ’60s super spy, is cryogenically frozen, literally put on ice, to be thawed out once his arch nemesis, Dr. Evil, returns. thirty years later, the two return and have to adjust to the ’90s.

My Take-Very episodic, with a plot that is nearly irrelevant. Mike Myers is, however, a comedic genius of sorts and the characters he creates here are classic. Austin Powers is mostly a feature length series of jokes, but the jokes are very good, and even the lesser jokes are milked for humor by Myers successfully. Works especially well if you’ve seen the Bond films.