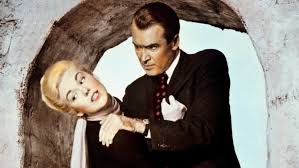 Hitchcock’s most critically lauded work sees James Stewart playing a recently retired cop. Due to a traumatic experience with the loss of his partner, he now suffers from extreme vertigo, wherein his legs give out and his head starts spinning when dealing with heights. He becomes a sort of private eye for an old friend who’s worried about his beautiful, but troubled-and very blonde-wife (Novak). While following her, Stewart finds her wrapped up in a ghost story, but still can’t help falling in love, complicating everything. I’ve read all the essays and reviews on this film which are fascinating, and there’s a good little twist-though it comes rather early for a mystery film- but for me, Vertigo’s a case of the subtext being more interesting than the movie, which becomes a drag in the third act as we spiral to the inevitable conclusion. That being said, the actors are perfect, the score is astounding, and the surrealistic imagery used to suggest Stewart’s psyche is unforgettable.