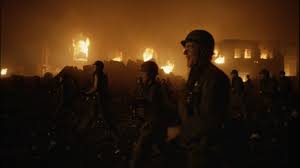 Clinical, episodic war film that breaks nicely into two parts: boot camp and then combat. I’ve heard many people state that they prefer the first part that centers on Private Joker and the troop black mark, Leonard (an over-weight, dim-witted, unlikable slob played perfectly by D’Onofrio), as they do their best to survive boot camp under the hard rule of drill instructor Hartman (Ermey, whose relentless and odd insults are classic). The second part is more divisive. Some find it uninteresting. Technically, it’s superb, as Kubrick executes some of the most elaborate tracking shots and long takes ever put on screen. I think the problem some people will have is the dispassionate tone throughout, and lack of character development, which I see as part of the point. These soldiers are meant to devolve into killing machines without thoughts or character. It isn’t a unique theme for a war movie, but Kubrick’s ice cold vision and technical prowess make it one of the best.