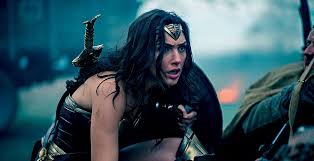 Word on the street was, the new Wonder Woman movie knocks it out of the park. I tempered my expectations. Just as critics have films they’re ready to shred, they also have films that they’re prepared to love. I knew Wonder Woman would benefit from following pure, unfiltered garbage in Suicide Squad. I knew that DC’s string of lousy offerings would lower the bar, so much so that any sense or sign of quality could clear it. Add to that, it’s a female superhero movie. We all know, we’ve heard the rumblings, that there aren’t enough female protagonists in movies. The damsel in distress model still far outweighs the strong battle-ready woman, and people are tired of that. So in comes Wonder Woman, directed by Patty Jenkins-her first film since the critically acclaimed Monster (2003). The first superhero movie directed by a woman apparently? Do I have that right? That’s crazy if it’s true, but regardless, the question remains does Wonder Woman hold up as a film? Aside from the social importance of it, aside from the message it offers, aside from gender politics, is it a good movie? I say, yes. Yes, it is.

The film progresses in three distinct acts. Act one is Wonder Woman’s origin story. Born Diane, the offspring of gods, molded by Queen Hippolyta (played by Connie Nielsen looking remarkably fierce) and given life by Zeus, an absentee father. Raised as a princess by her mother on Themyscira, an island nation inhabited exclusively by tall beautiful women warriors, and trained by her aunt, General Antiope (Wright), from a young age, she quickly becomes Wonder Woman, ready to take on all challengers. From here, Diane is played by Gal Gadot, perfectly suited to the iconic role, and a big reason why this film will likely be a massive hit. Her Diane is strong, beautiful, intelligent, and sweet; and what’s more, she makes it look effortless, which is crucial to making the character someone we can aspire to be rather than feeling too much like a heavy-handed social message.

The second act is where the film gains steam. An Air Force intelligence officer, Steve Trevor (Pine), crash lands on Diane’s island, bringing news of cataclysmic war-World War I to be exact. Diane feels it incumbent upon herself to join in, and so she travels to early 20th century London with Trevor, wanting to put an end to the war. The film’s able to pull a good amount of humor from its social inequality agenda. This Diane, a creation of 21st-century minds made for a 21st-century audience,  has no respect for society’s rules of the day. They hire a ragtag team of scoundrels to help sneak into enemy territory and fight Dr. Poison and General Erich Ludendorff.

Some quibbles. The third act is where the film began to lose me slightly, as the CGI took over from the actors who were thoroughly more interesting. It’s not so much a problem that a big-budget feature like this should be 2 hours and twenty minutes in runtime as it is that it feels 2 hours and 20 minutes long. That’s due to acts 1 and especially 3 overstaying their welcome. The fish out of water material with Diane in London, the romance between her and Chris Pine, and the scrappy, underdog crew they employ to help them are what I enjoyed. Also, the film’s best action sequence comes around halfway through with Diane leading the charge out of the trenches of No Man’s Land. I was also disappointed by the villains. There’s extensive build-up for one villain in particular, and, outside of the well-done mystery element to it, the payoff is a letdown.

Overall, I enjoyed the movie, and I imagine most people will too; probably even more so than me. It’s not a groundbreaking superhero film the way I believe this year’s Logan was, or Christopher Nolan’s Batman trilogy was however many years ago, but it does show that DC hasn’t completely forgotten how to make a movie after all. I look forward to seeing Wonder Woman in later adventures.

One thought on “Wonder Woman (2017, Directed by Patty Jenkins) English 6”