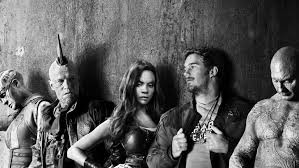 Sequel to Marvel’s uber-hit features Star-Lord, Gamora, Rocket, Drax, and baby Groot back to save the universe, though the film takes its time revealing how. That turns out to be one of its chief pleasures (its solid buildup of mystery and intrigue) and what makes it, in my estimation, superior to the first. Peter/Star-lord (Pratt) and the gang are on the run from a race called sovereigns-hilariously pompous people with golden skin-which leads them to make a crash landing and meet Peter’s father (Russell). Meanwhile, the man who raised him, Yondu, is tasked with tracking Peter down, while his crew contemplates mutiny. There’s a lot that goes on in this picture. Its visuals are a constant barrage of color and special effects. Non-stop jokes no matter what the situation. It’s what made the first film such a hit, and I think people will be happy with this sequel. I will say that the Awesome Mix volume 2 isn’t as awesome as the first. The songs are still good to great, but there aren’t any real surprises.

One thought on “Guardians of the Galaxy volume 2 (2017, Directed by James Gunn) English 6”