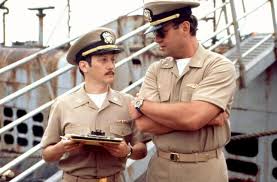 Made during the height of his Fraser fame, Kelsey Grammar stars as Lieutenant Commander Thomas Dodge, a rogue officer tasked with captaining an outdated diesel sub. Among his crew are an insubordinate Engineman, a slob of a culinary specialist, an over-zealous ex-o, a female diving officer, and other oddballs. It’s a mostly painless bad movie. Just don’t take it too seriously. Don’t take it seriously at all, because it’s completely ludicrous.