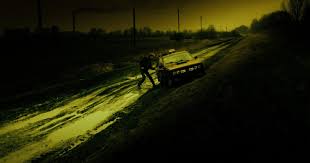 Three men: a local youth and delinquent, a quiet cab driver, and a sensitive young lawyer all interweave as this film begins. The delinquent kills the cab driver in an extended, excruciating sequence that shows the latter desperately, hopelessly fighting for his life before finally succumbing. The lawyer defends the delinquent in court, but loses, leading to capital punishment. The murderer’s death is shown to be equally brutal and cold. Kieślowski makes no secret of how he feels on the subject. There are two killings in the film, and they resemble one another. Both done with the same method even-rope. It’s a uniquely shot, unflinching indictment of the system told simply, but powerfully.