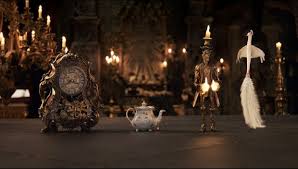 I remember Alec Baldwin speaking with the late-great Robert Osborne about remakes some time ago. The program was TCM Essentials. The movie was Judy Garland’s A Star is Born (1954, a remake of a 1937 film), and Baldwin was explaining the appeal of certain remakes. Essentially, “People would like to see the story told with actors from their era.” This view holds some merit- A Star is Born is being retold yet again, this time with Lady Gaga and Bradley Cooper-but it also points out what makes redoing a Disney animated classic such a doubtful undertaking. Animation, when done right, and Disney tends to do animation right, is timeless.  How many films from the 1930s would you say the average person has watched? Now, how many people have seen Snow White and the Seven Dwarves (1937)? Any, and there are soon to be half a dozen, Disney live-action remake is destined to be less-than. And so we come to Beauty and the Beast, starring Emma Watson, directed by Bill Condon. That this new version of the French fairy tale is an overwhelming, dazzling visual spectacle, a well-performed, still compelling fantasy, and overall, a good film is less important than that it is not as good as its predecessor. For the sake of this review, I will pretend to judge the film in its own right, but, in reality, it’s impossible to watch, for example, the Tale as Old as Time sequence without judging it against its origin.

The story, as I’m sure you are familiar, concerns Belle, our beautiful, headstrong heroine who struggles to fit into provincial 18th-century life. The townsfolk think her odd. She keeps her head in books all day and doesn’t swoon after Gaston, town hero, like all the other girls…and LeFou. After her father gets lost and becomes the prisoner of a terrible beast, Belle tracks him down and takes her father’s place. She’s imprisoned for all time in a mysterious, enchanted castle with furniture and silverware that can talk, and a captor who’s monstrous in appearance and temperament. But, she finds out, what we already know, that the Beast is actually a handsome prince, condemned by a curse. The only thing that can save him is if he can learn to love and be loved by another person.

There’s a lot of little things that keep this production from being a knock-off. This version offers more backstory for key characters and fleshes out certain points.   Gaston is a war hero in addition to being a big game hunter.  Added musical numbers. Larger scale production. The added musical numbers are fine, if not overly memorable. The classics, the hits like “Be Our Guest” and “Tale as Old as Time” are present, and done well enough.  Belle’s mother is explained (I found this-though a somber story point-an amusing contrast to Disney’s long history of never-discussed M.I.A parents in their animated films). Add to this aside that Mr. Potts is also introduced.

Emma Watson is Belle. Dan Stevens is Beast. Luke Evans is Gaston. Josh Gad is LeFou. Emma Thompson is Mrs. Potts. Ewan McGregor is Lumiere. Ian McKellan is Cogsworth. The production team manage to narrowly escape making the latter two creepy but are not completely successful in making them charming. LeFou is the only character that is more interesting (to some people’s objection) this time out. He’s still comic relief, but he’s better comic relief. Luke Evans makes a very strong Gaston, as he moves from being comically narcissistic to downright villainous. The leads had a steep hill to climb catching up with the two animated counterparts that were most vividly fixed in my mind. I can’t say they fully measure up. Like the film, as a whole, they are skillful imitations, and though that is, to some degree, a credit to them, I was not completely satisfied.

Go see Beauty and the Beast if you’re in need of ready nostalgia, a big, vibrant film with its large production budget conspicuous across each frame; a good movie.