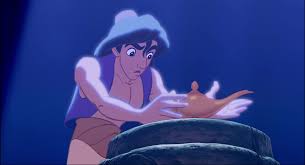 Released at the height of Disney’s renaissance, this reworking of a folktale from One Thousand and One Nights owes a lot to both the Douglas Fairbanks and Alexander Korda incarnation of Thief of Bagdad. A young street urchin, Aladdin, gets caught up in a plot of the evil Jafar, Grand Vizier, after falling for the beautiful Princess Jasmin. With the help of a wish-granting Genie, Aladdin pretends to be royalty, thinking it necessary to win his true love’s heart. Lively songs, an appealing story, great supporting characters in Abu and Carpet, and typical first-rate animation from Disney. Genie, voiced by Robin Williams, steals the show.