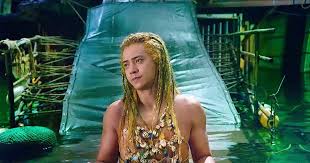 Completely bonkers update of the Hans Christian Andersen tale of the Little Mermaid, a beautiful young mermaid along with her suffering merpeople plot to assassinate the selfish billionaire playboy (Chao) responsible for polluting their home. Chow has developed his own comic style over a couple decades of filmmaking. This, his biggest hit, features his staples: over the top CGI, cartoonish violence, extremely broad humor, and an engaging hero. Audacious in its ridiculousness, I eventually became engaged in the film as it progressed.