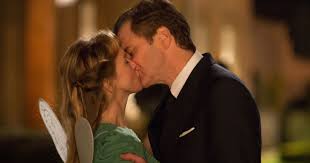 Bridget Jones must be something of an archetype. As someone who does not relate to this character, portrayed by Renee Zellweger now for the third time, and who sees her more as caricature than as a real to life figure, it’s amazing to me how strongly she appeals to a certain demographic and how able that demographic is at laughing, crying, swooning with Jones’ adventures as if they were their own. Is this how unmarried thirty and forty-year-old women see themselves? My guess is that she represents what a lot of women exaggerate themselves as, and her story-closely modeled after Pride and Prejudice-represents what a lot of women fantasize about. Watching a Bridget Jones fan watch a Bridget Jones movie is entertainment unto itself. They go through the full range of emotions with each viewing as if they’ve haven’t seen it before. I have two such people in my life, and consequently, Bridget Jones has become a pretty significant force in the periphery of my life. I’ve seen Bridget Jones’ Diary in bits and pieces too many times to count. I know the parts, the scenes, the moments that its audience loves. Perhaps I’m giving myself too much credit but it is with this self-ascribed understanding that I attended the latest outing from the lovably inelegant Ms. Jones. I found Bridget Jones’ Baby to be a rebound from the overly sit-commy sequel and a return to the charm of the first Bridget Jones film.

This film starts off almost exactly like the first. Fifteen years since winding up in the arms of Mr. Darcy (Colin Firth of course), she is now, once again, alone in her apartment listening to “All by Myself.” Then, amusingly, the film shifts gears, with her changing the music to “Jump Around” by House of Pain. The first half of the movie pretty much stays in that gear. It’s fast-paced, crude, and surprisingly raunchy as the 40 plus-year-old Bridget decides to take up the hedonistic attitude of her friend, Miranda, a new character. They wind up having a crazy day at a music festival, and Bridget has a one night stand with Jack Qwant, played by Patrick Dempsey, another new character. Later, Bridget reunites with Darcy for a night, and thus the film’s plot is set in motion. She gets pregnant and doesn’t know which of the two dashing men is the father. Is it the handsome and rich newcomer from America or the classic Mr. Darcy?

The second half is all wish fulfillment and hijinks which is what we go for. Both men vie for her love and hope that the baby is theirs, and the film milks a lot of laughs from the absurdity of the situation. Emma Thompson plays the quietly knowing doctor, and all the familiar faces from the two previous installments return for this one. The laughs are there, the awkwardness, the romance is there, and I think fans of the franchise will be excited about the new Bridget Jones.