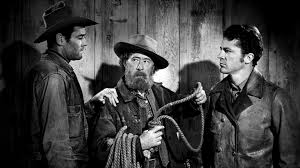 A small town finds one of its members shot in the head, and sets out to catch and hang the men responsible. Once they catch the men they believe to be guilty, they decide to forgo law and order, and invoke vigilante justice. What ensues will hardly surprise anyone. Exactly what you expect to happen happens. Yet this western starring Henry Fonda remains tense throughout, and its ending poignant.