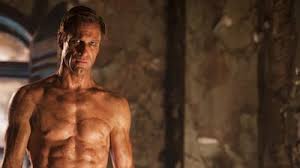 Adam: I was cast into being in winter of 1795, a living corpse without a soul, stitched, jolted, bludgeoned back to life by a madman. Horrified by his creation, he tried to destroy me, but I survived.

Attempting to be a unique take on the Mary Shelley tale, this Frankenstein sees its monster, named Adam (Eckhart), as an immortal stuck in the middle of a holy war between gargoyles and demons.  Lame character design (the budget is pretty small for a film of this nature) mars what could have been a perfectly mediocre film about Frankenstein’s monster seeking redemption in the modern world. Basic at every level and only passably interesting to begin with in this case equals bad movie.