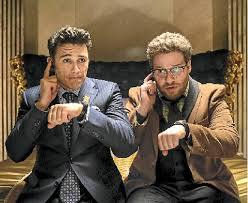 Dave Skylark: They hate us because they ain’t us!

James Franco and Seth Rogen conspire to assassinate the world’s most infamous dictator. As partners on a media gossip television news program (Franco the host and Rogen the producer), they’re given a rare opportunity to meet the leader of North Korea’s regime, Kim Jong-un (Park). With its incendiary premise, it should have been more significant, and though it will be remembered more for the controversy it generated rather than the assorted hit or miss jokes, it does have enough humor and creativity to make it worth viewing at least once, whether North Korea agrees or not.