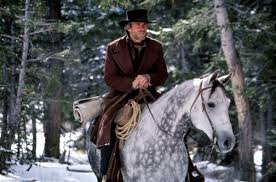 A more conspicuously symbolic version of Shane, this film stars Clint Eastwood as a drifting Preacher ostensibly prayed into existence by a young girl. Her town is being bullied by big money competition, until Eastwood comes to protect the local prospectors, leading to a final shootout with the gun for hires. A fine western in a decade when the genre was already obsolete.