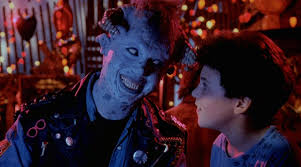 Memorable more as a creepfest than as a good or entertaining movie, Little Monsters features Fred Savage as a young boy befriending a monster played by Howie Mandel with blue skin and horns. Mischief ensues, but more importantly bonds are formed. Nostalgia plays a major role in any affection I have for this silly picture.